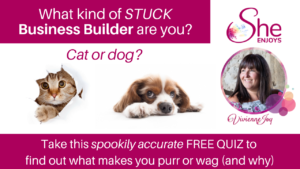 Vivienne Joy here, creator of the transformation tribe called She Thrives. And thrive is the word that we all want isn’t it? This feeling of satisfaction, fulfilment, flow, fabulous happiness!

So many women who come to me for coaching, training, mentoring, accountability, or just really to help them get out of their own way, are not in that space. Many times it’s because they built a business and sometimes did a really good job of building a business, but it wasn’t for them. It just wasn’t for them. It wasn’t because they wanted that business, it was because somebody said it was a good idea, or they thought it was the only thing they could do, or they had decided somewhere way back that it was all they were capable of. And very often they come to me because they’ve built a business and they’ve built the money and even the revenue – and I mean, some of you would simply love to be in that place (in which case, let me help you do that), but if you build a business that doesn’t have satisfaction, it won’t feel like a success. You’ll feel like a failure. And I know because I’ve been there.

So, I had a quarter-million-pound recruitment business, which most people would give their left arm for. And the clients loved us, we had a great team, we had a great time. But it gave me no satisfaction because I was meant to be doing what I’m doing now. So sometimes you build a business and you think it’s what you want. It can be the same with relationships. You think it’s what you want and then when you get it you realise it’s not quite what you want, and sometimes it’s really hard to unpick that.

I have a friend that’s just closed a very successful half-million-pound company because she’s hated every moment of it. She hated getting up, she hated the client – she hated everything. And it didn’t get to that stage overnight I hasten to add, and nobody was injured or harmed. But she simply got to the stage where she knew she had to close it, sell it, or do some abdicating and get someone else to run it for her.

So if this is you and you are in a situation where you know you should feel great, you should feel happy, and you can’t understand why you don’t – you’re looking around yourself and thinking that you live in a nice house, you’ve got enough money, you actually quite enjoy what you do most of the time, you’ve got friends, you’ve got lots of time – the things that are sort of a dream for most people, and at one point you desperately wanted those things more than anything – and now you’ve got them, it’s not enough. Because satisfaction and fulfilment come from a whole other place than outside of yourself. They come from how it feels, not how it looks, how it earns, what it gives you. It’s how it feels.

Is your heart in it?

If you don’t feel like you’re on purpose, or “on it”, or passionate, or “your heart’s not in it” – you’ve probably heard that phrase; then it’s not really for you. I’ve been coaching in this business specifically for six years and I’ve worked out that at least 60% of the women who have come to me, and there’s been thousands through group programmes, one to ones, retreats – everything I’ve run, as well as book sales and everything else –  it’s because they don’t understand. They either don’t understand where they’re going wrong, i.e. they need to thrive and they think they’re doing all right but they’re not, or they’ve got to where they thought they would need to be to thrive and it doesn’t feel like it should.

I remember the first time I became an MD of a company and in my head, the MD of a company knew everything. The MD of the company knew their shit, they knew everything, they could control everything, they felt amazing, they had their shit together. And then when I became the MD of a company, not even my own to start with, I realised I didn’t know any more than I did when I was a Commercial Director, or when I was Sales Manager, or any of the other roles I’ve done through my very candid career in my many, many years in business. And for others and for myself even, I realised that it’s actually just a title, it’s just a job. A big job, because it’s overseeing everything and actually you just get more problems. So I was quite disillusioned.

Are you feeling disillusioned with where you are in your business? Does it feel like you have been striving, and striving, and striving and you’ve arrived? So you’ve done all the strive and now you’re at arrive? And it’s really not what you thought it would be? I’ve got more examples, I could talk about it all day because I do, and it’s exactly what I coach!

When the dream isn’t your dream

I remember when I was building a business for coaching and I got to the point where I had the laptop lifestyle. Everybody says they want the laptop lifestyle – it was purely online and this was before COVID hit so I could go anywhere, I could be anywhere. I consistently had a strategy where I’d have one week out of the country and three weeks in, then the next year it would be two weeks out of the country and two weeks in, and then three weeks out and one week in until I got to the stage where I could be anywhere in the world. And this was because I knew I was going to relocate. So that laptop lifestyle which everybody said was amazing – I watched all the coaches having it and I thought it was my dream, but it wasn’t really my dream, it was somebody else’s.

So when I ask if you are creating a business for you, or because you’ve seen someone else look like they have an amazing time, they’ve got amazing business success, and it looks easy – make sure your business is for you.  Because as soon as I had that laptop business, I realised I was just going to different countries and doing the same thing and it was just costing me a lot of money and time in the air. I didn’t want to sit on a beach because it’s very sandy, you can’t see the screen properly, it’s quite inconvenient, laptops don’t have the charge they should do, it’s too distracting, I didn’t have my paperwork, I prefer my duel screen and I realised it wasn’t for me. And I’d built a business because I thought it was what I wanted, but when I got there it wasn’t.

Luckily, a massive part of it is what I wanted and I found my wife, got married, settled down, and we’re having a great time. And I love being in the UK and I’ve got no desire really (apart from the odd holiday) to go anywhere else. So luckily for me, I could adjust it at the end. Sometimes it’s not about adjusting, but sometimes it is and we can adjust it. So if this is going on for you, please reach out to me and we can understand what has created this for you, why you’ve created the business, what you need next, how we can change it. Sometimes it’s not about removing it, or actually what it is you really want to do, and if you don’t know what you want to do, then you definitely need to find out. That’s really powerful.

Book in for a free 15 minute call and let’s chat!

Look forward to hearing from you!